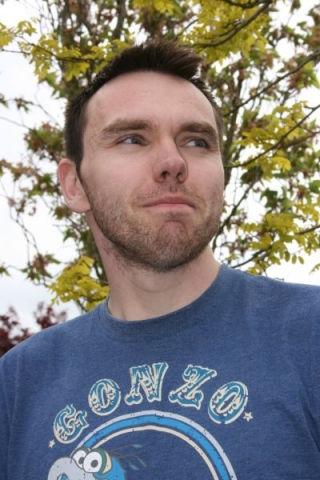 I'm young and enthusiastic with a great sense of humour. I've always loved film and television and the stage and want to take the next step and get up there and do it for a living. I've got an ecclectic taste in movies and television ranging from musicals to horror and sci fi with everything in between.

I have appeared in various very low budget films playing a variety of parts from a criminal who gets beaten up, to an ordinary average guy who finds himself in a weird situation one day. I've been involved in making a trailer to help promote an idea for a television series, and also shot part of a movie where i played a hitman. Unfortunatley due to time and budget problems the movie was never finished.

I haven't a great deal of entertainment experience, i've been in a couple of local productions and have done some stand up at open mike nights.

I have appeared in the background of quite a few student films and some music videos aswell.

I have a bit of experience but nothing major, alot of what i have done has been as part of friends projects for uni, or their independant films and music videos. I was a regular in school productions and have appeared on stage in some local productions too.

I don't really have any formal training to speak of. I have a drama G.C.S.E grade c, but that is pretty much it.

I am reasonably good at doing voices and have on occasion managed to fool people with the voices that i do. I have quite a good singing voice and can dance to a degree. I can play anything from light hearted loveable everyman characters (like James Stewart) to intense psycho's (like robert mitchum in night of the hunter).

I have an obsession with movies and like nothing moe than sitting down and getting lost in a good film for a couple hours. I love to entertain people with whatever i do and so occasionally go along to open mike nights and do a bit of stand up. I'm very into reading and writing my own things aswell, I currently am on the hunt for someone to publish some of my work, and have some people who are interested in it. I like to keep fit and play football whenever i get the chance to.

I've had soo much good response since I've joined, ive been accepted for a feature film , i soo cant wait. BRILLIANT !!